This month’s cookbook of the month pick is Feast, by Nigella Lawson. A book I’ve had for some time, 11 years to be exact, but I never had ventured particularly too far from her chapters on Christmas or the Chocolate Cake Hall of Fame, both filled with plenty of recipes that make the book worthwhile on their own. The subtitle, food that celebrates life is exactly what this book is about, effortless food that brings people together.

With the approach of Easter I finally considered attempting a recipe that has stood out for some time, and that’s the Saffron Roast Lamb with Garlicky Potatoes. Which I had very successfully made but very unsuccessfully photographed, largely due to the lack of natural light at the time. So, to keep to my promise of cooking from a cookbook a month and sharing it on Instagram, I made a second attempt, but this time with a chicken.

The original recipe involves nestling a leg of lamb in a nest of torn up spring onions, mint, bay leaves and lemon. Substituting the lamb for chicken I simply swapped the mint for dill, and then proceeded by leaving the chicken overnight in the fridge.

Now if there is one thing I’m not great at, it’s carving. I’m too impatient and half the meat ends up cold by the time I’m finished. So instead, I butterfly my chicken, this way it cooks faster, is more juicy and cutting it into portions to serve is a breeze. The best thing though is that it requires nothing more than a sharp knife, or even easier, some good kitchen scissors and it simply involves cutting down both sides of the chicken spine, flipping the bird over and pressing it down to flatten. And if you lack the confidence, consult YouTube and you will see just how easy it really is.

Hey Now, most importantly, don’t throw away the spine you’ve removed, roast it alongside the chicken, skin side up and gnaw away at some of the crispiest chicken skin you’ve ever eaten. Do not share.

When roasting the bird, I kept the heat high, at 220C, the same temperature used for the lamb in the original recipe and for the potatoes. Roasting the bird in a deeper sided baking tin will ensure the juices from the chicken don’t evaporate too quickly, or even worse, burn and will leave you with more chickeny liquid for gravy later. The golden hued ‘gravy’ that goes alongside is made up from the roasting juices from the bird and saffron that has been steeped in water. One addition I made was to add a very very small amount of cornflour to the liquid before heating, just to allow it to thicken. Whenever I do this, all I do is dip my mini whisk into a jar of cornflour, then stir the small amount of cornflour clinging to the whisk into the liquid before heating. The amount is small, substantially small, but you don’t clag glue, but a sauce that clings, just to the meat. Just be patient, stir, let it reduce and it will thicken.

If you can, I would certainly suggest the beautiful blue and white enamel white roasting dish insert link to dish here. The beauty of these roasting dishes is the enamel makes for much easier cleaning, any left on roasted residue effortlessly wipes away after a short soak in soapy water and anything more stubborn will come away with a damp cloth and bicarb. 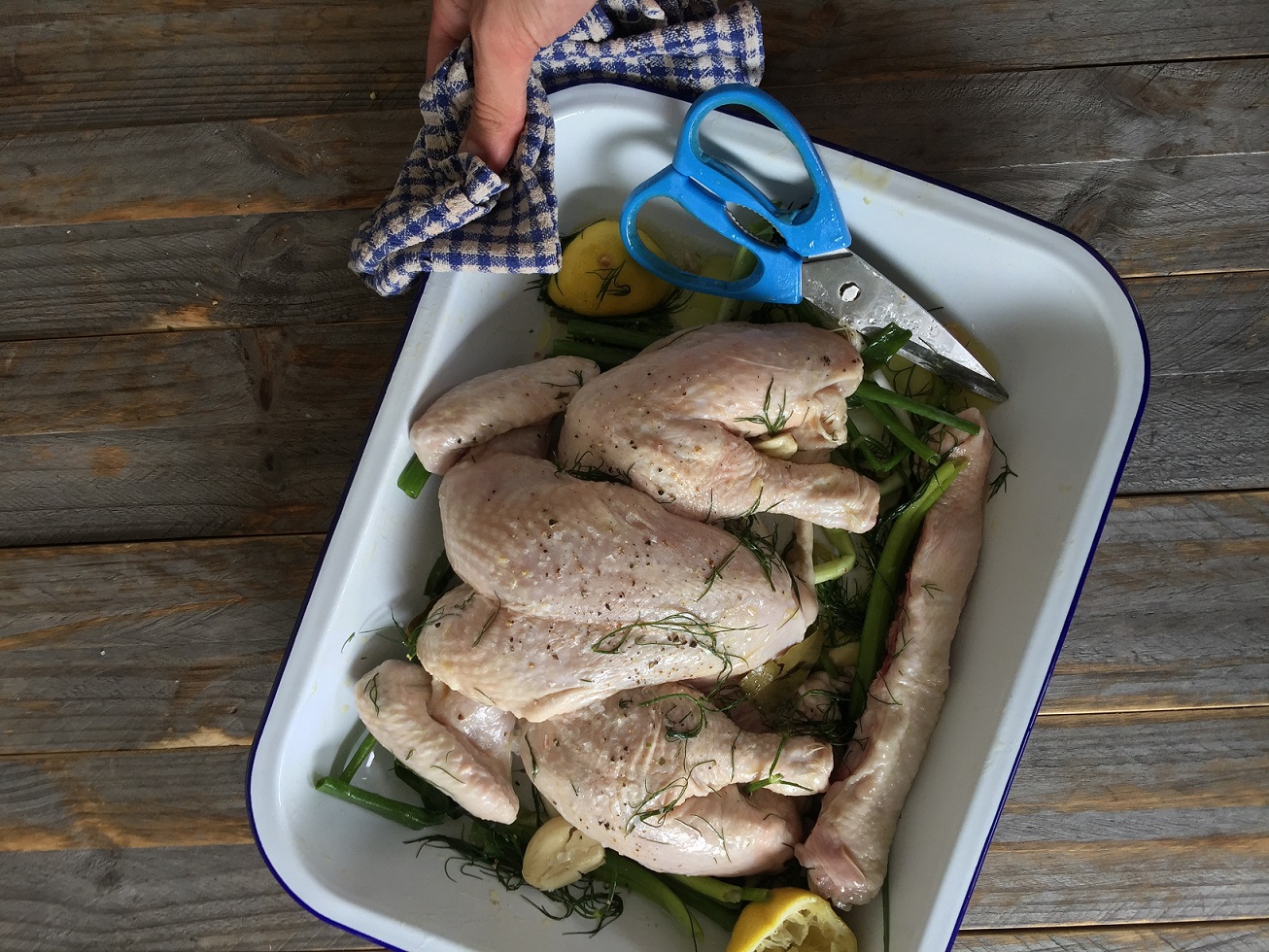 Shelife game strong 😍 Add some style to your ta