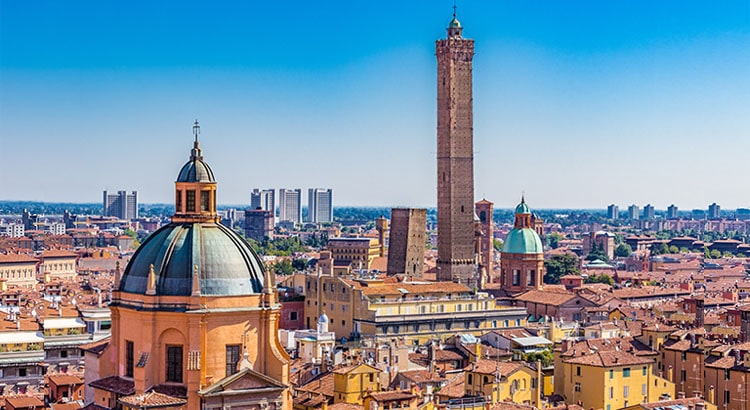 Amid the medieval streets and historic structures of the Italian city of Bologna is a storied food tradition. It’s quite simple, really; it’s either handmade, cooked for hours, or preserved for years. Bologna, after all, has been doing artisan and gourmet long before they became food buzzwords. Let this guide transport you to the beautiful world of traditional pasta, fine cheese, cured meat, and exquisite wine.

Bologna has a number of nicknames which capture its essence: La Grassa, or the fat because in this city, you eat and well; La Dotta, or the learned as the home of the world’s oldest university; and La Rossa, or the red for its terracotta roofs and left-leaning politics.

Bologna is located at the heart of Italy’s famous gastronomic region, Emilia-Romagna. It is arguably front and centre as the historic capital of this region where many beloved Italian dishes originated.

Aside from its native dishes and food products—bolognese, tortellini, tagliatelle, mortadella, lasagna, to name a few—Bologna is where you can have a taste of the equally famous specialities of the wider region: parmigiano-reggiano, prosciutto di Parma, balsamic vinegar from nearby Modena, and gelato.

When you get them in Bologna, you can be assured they are authentic. And authenticity is precious not only to this city but to the country in general which protects its food traditions for cultural and economic reasons with unparalleled zeal.

You will frequently come across the term “DOP” in relation to Italian food products. This means Denominazione di Origine Protetta, or Protected Designation of Origin, a guarantee that only products traditionally grown and made from accredited regions can carry. Hence, only cheese from the sanctioned areas in Emilia-Romagna can be called parmigiano-reggiano. The rest would have to settle for ordinary parmesan.

Know where to find the best local food, drinks, and restaurants in this beautiful Renaissance city also known as the food capital of Italy. 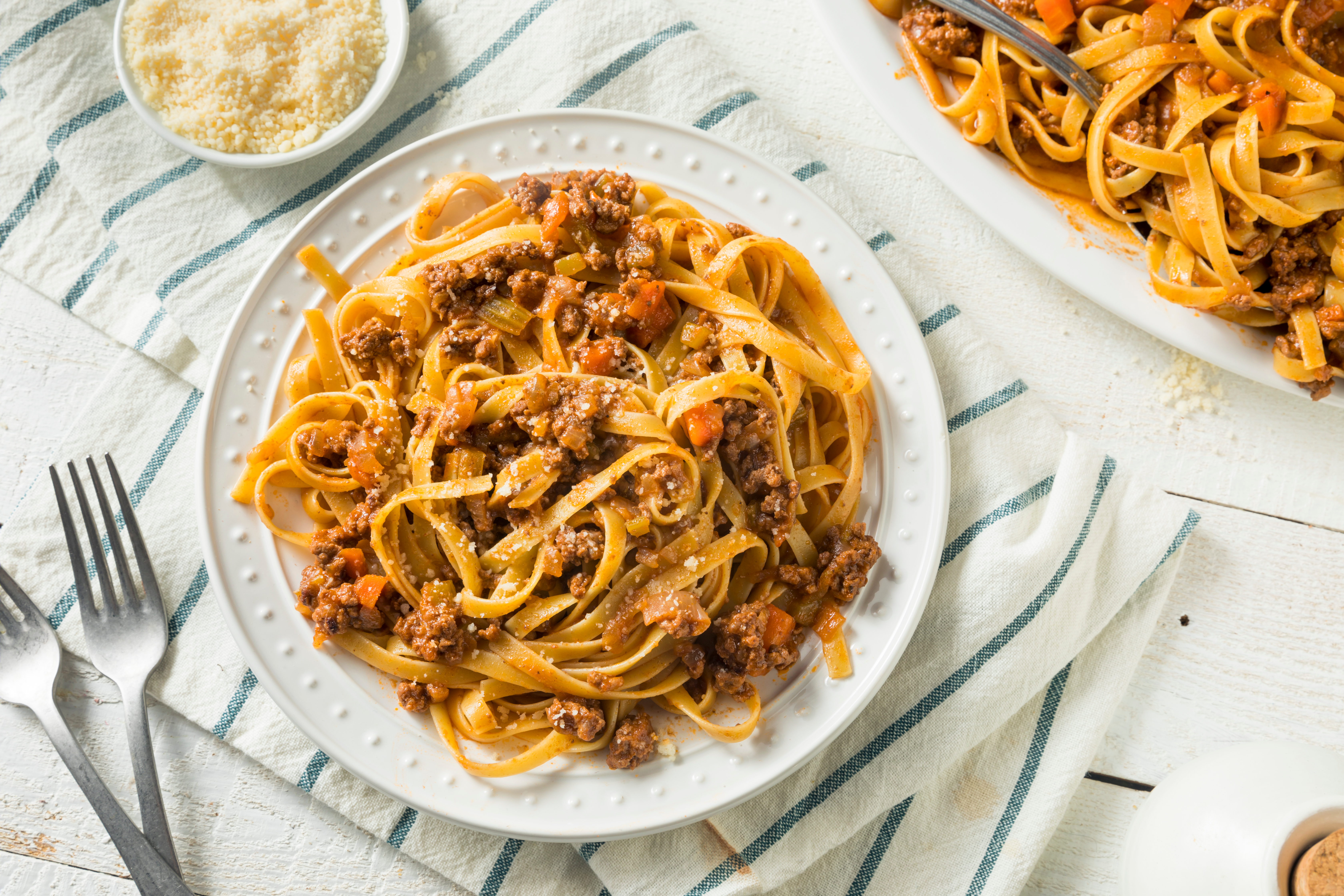 Tortellini is a ring-shaped pasta stuffed with meat or cheese that is traditionally served in savoury broth (en brodo). Though other sauces like tomato, mushroom or meat are also popular, the broth made from capon or a castrated rooster is what makes each bite meaty and flavourful. Some prefer to top it with cheese but it’s best as it is. They say a spoonful should fit up to seven tortellini.

There are also larger versions called tortelloni and tortellacci. While tortelloni is typically stuffed with cheese and greens (such as spinach) and served with butter or light cream sauce, tortellaci comes rolled with spinach, meat, onions and garlic, and often sauteed with butter, a little wine and other seasonings (e.g. rosemary and pancetta.)

Trivia: Italian pasta are handmade from fresh dough that consists of flour and egg yolk so it comes in bright yellow colour, unless coloured.

It goes without saying that bolognese is a must in Bologna. However, don’t be surprised if you won’t find spaghetti bolognese here. It doesn’t exist (unless you visit restaurants exclusive for tourists.) because authentic bolognese is actually served with tagliatelle, a long, flat ribbon-cut shaped pasta similar to fettuccine. Its shape is better suited to catch the little bites of ragù (meat sauce) on each forkful compared to thin, cylindrical spaghetti noodles.

In Bologna, there’s also mortadella you can find in virtually every restaurant. It is a large Italian sausage made of finely hashed, heat-cured pork dotted with white pieces of fat that taste delicious. Though it is often associated with the commercial devon and polony, they come a long way in taste, texture, and quality.

The most famous cheese in Italy is parmigiano-reggiano. It’s hard, dry cheese made from skimmed or partially skimmed cow’s milk and produced only in specific areas in Italy such as Bologna, Mantua, Modena, or Parma to protect its quality. Aged for at least two years, parmigiano-reggiano has a nutty, complex and strong flavour that goes along with any dish it garnishes. But for snacking, one-year old cheese are said to be the best.

Unless you’re vegan or allergic to dairy, you don’t go to Italy without eating gelato. Gelato is made with more milk than cream, allowing it to freeze at a lower temperature and taste lighter. Churned at a slower speed compared to ice cream, it is denser and has more intense flavours. You’ll know it’s authentic if colours are naturally a result of the fresh ingredients like brownish, not green, for pistachio or deep red, and not bright pink, for berry.

Unlike any other typical vinegar on the market or balsamic vinegar, to be specific, aceto balsamico di Modena is a result of a 12-year ageing process which produces a thick consistency, deep brown colour, and richer taste from white and red sweet grapes. It is known as the perfect condiment for most dishes in Italy and locals like to drizzle it over their cheese, pasta, meat, and fruits. Lambrusco is an Italian red grape wine served cold and is slightly fizzy. Made from four different grapes including sorbara, reggiano, grasparosso and salomino, it is the local’s typical pairing with Italian meats. Its flavour is very fruity and rich, sometimes earthy, undercut by the nice punch of bubbles.

With a tangy, fruity flavour, pignoletto or Bolognese white win is the counterpart of red grape lambrusco. Also perfect to pair with cold cuts and cured meats, this sparkling wine has a great tartness and acidity to balance out the aromatics and fruity notes.

A rare variety, negretto is considered one of Italy’s secret wines. Only a handful of wine makers from the Emilia-Romagna region make it. Made from deeply coloured grapes, negretto is said to taste fresh, fruity, and quite tannic. You will be lucky to find a restaurant serving it.

More than just coffee, caffè allo zabaione is an indulgent mix of espresso and zabaione—egg yolks, sugar, and sweet wine. It is usually served for dessert after meals and traditionally a morning pick-me-up too for locals. You can go all-out Italian and give it a shot before exploring the city for the day.

If you must know, espresso or the elegant process of extracting coffee beans is actually of Italian origin. Here, people have a serious tradition of making and drinking their espresso. First, it should be made pure with no additives or milk. Second, you have to drink it right away after it’s made. Don’t even try to drink cappuccino after breakfast or at any meal otherwise if you don’t wish to receive strange looks. The only Michelin-starred restaurant in Bologna, I Portici is the among the most elegant and most delicious restaurants in town, serving classic and traditional Bolognese dishes with a modern twist. Headed by executive chef Emanuele Petrosino, Young Chef Michelin 2019, the restaurant boasts of a creative cuisine enhanced by the precious atmosphere of the place with oil candles, crystalware, fine porcelain and premium linen. It’s both contemporary and romantic.

For a genuine handmade pasta experience, you will find Sfoglia Rina a charming space to visit. Known for its friendly ambiance, and unpretentious, fresh and authentic food offerings, it’s also famous for serving the most affordable and seasonal pasta dishes unique to Bologna. Do try to secure a table earlier in the day as their specials sell out fast.

If you’re on a budget trip, eating at the food market whilst shopping for fresh goodies is a good option. In Bologna, you’ll find the food market at the town’s oldest mercantile centre, quadrilatero. Here you will find delis, produce stands, bakeries and food stalls that will let you sample before you buy. There are also small restaurants and pubs if you want to dine in. As ancient as the Medieval Ages, the market has remained relatively unchanged and picture-perfect with its beautiful arched porticos lining the streets.

Gelateria Galliera 49 is among the most visited gelaterias in Bologna. How could it not, with a tagline that reads “You’ll never pay for whipped cream.” With the owners and their staff working hands-on, the simple, artisanal shop offers more than 20 unique flavours of gelato, not to mention delicious sorbet, granita (semi-frozen liquid served in a glass), brioche stuffed with granita, and cannolo (fried dough shell often filled with ricotta.) 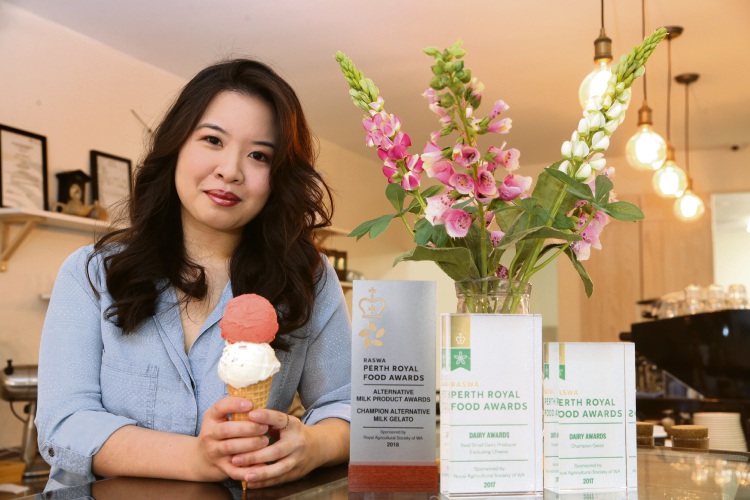 Local gelatier Cheryl Lim, owner of Perth’s The Milk Barrel, knows a thing or two about Bologna. A chartered accountant by trade, Cheryl took her love for gourmet ice cream to the next level by studying at Bologna’s Carpigiani Gelato University, the first such institution in the world.

In only two years since opening shop, The Milk Barrel at Hillary’s Boat Harbour has already won numerous awards, including Champion Gelato and Best Small Dairy Producer at the Perth Royal Food Awards.

Want to know more about gelato and how to make it? Learn the art of crafting Italian gelato from Cheryl at our exclusive workshop. Learn more here.

Aside from those mentioned above, Cheryl said that anyone who goes to Bologna must also try culatello di Zibello. Another product stamped with a DOP, culatello is a prized Italian salumi made mainly in the city of Zibello, near Parma. Lesser known that prosciutto di Parma but called the true king of cured meat, culatello is made from the muscular mass of a pig’s hind leg. They are aged and dried in a humid cellar for at least 12 months. Not only is there an art to making culatello, but also to eating it.

“Great food, quite a good range of antipasti, pasta, meat, and seafood, prepared very well in a cosy family-owned restaurant. They do fill up very quickly so I would recommend calling up in advance to make a booking.”

“A great place for a special occasion or celebration. It is a little pricier and more upmarket, but the food and service is well worth it. I would also try to make a reservation if you can as it is quite popular with both locals and tourists.

“One of my favourite places for handmade pasta. They have an ever-changing menu of different seasonal items. Try to get in earlier for lunch as the specials each day do sell out. It’s also very affordable and I find they have interesting types of pasta not usually seen outside of Italy.”

“These are my favourite gelato shops in Bologna. Gelateria Galliera 49 is actually just across the street from Ristorante L’Arcimboldo, so it’s my sneaky second dessert after dinner at L’Arcimboldo!”

As you explore the city and eat you way around, it’s best to equip yourself with these basic Italian phrases to ease you into any conversation.