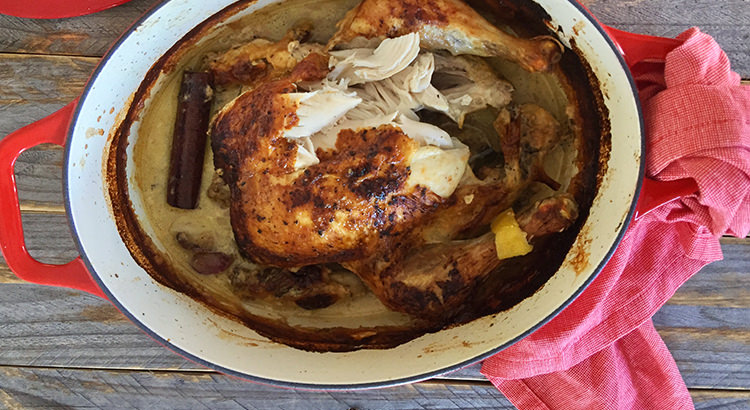 Like most people, I have accumulated quite the collection of Jamie Oliver cookbooks over the years, in fact I think I have *almost* all of them and this month’s cookbooks is one of his earlier books, Happy Days with the Naked Chef, published way back in 2001.

I was stuck choosing between two books for this month’s #CookbookOfTheMonth project (the other being Jennifer McLagan’s Bitter) but out of pure interest and intrigue I couldn’t go past Jamie’s recipe for Chicken cooked in Milk (and also a recipe for chilli that includes pureed sundried tomatoes, which I generally despise but out of interest also want to try. Besides is there a more appropriate dish to cook in a chilli red pot than chilli itself?)

So, armed with my oval chilli red Chasseur French oven, a chicken, some spices and over half a litre of milk I get to (minimal) work.

You start off by heating half a block of butter in a pan then brown your chicken on all sides. If it seems to stick, just leave it, as it colours and the skin crisps in the fat it will begin to peel away from the base of the pan, so don’t be frantic and move it about too much too early or you will risk tearing the skin. Once bronzed up, remove to a plate, then remove the butter, which, if you’re using an oval pot French oven you can easily tilt the pan from one long end up, and ladle out the butter that accumulates at the other end. Because it’s not round the butter accumulates in the ends for easy removal with a small ladle. The other benefit of an oval over circular dish less liquid seems to be required to come up the sides of the joint or bird you’re cooking.

As the chicken has its temporary break, throw in the other ingredients – except the milk – and stir around the sizzling lemon zest and aromatics in the residual chicken and butter fat. Now if you’re somewhat unorganised like me and find you get home and didn’t buy the sage that’s also meant to go in, use a couple of bay leaves. Whilst these aren’t the same, bay goes very well with roasted meat, and is also excellent with dairy so I had no problems whatsoever substituting with that. Now, grab a good scrapey spoon – I use a nice wooden flat one like this: http://www.kitchenwarehouse.com.au/Maxwell-Williams-Aspen-Solid-Turner-33cm and slowly pour in your milk while scraping up whatever has adhered to the pan. This will give you a better flavoured sauce but also, importantly makes washing up later a great deal easier. If you don’t have one of these, I honestly can’t recommend one enough.

Jamie describes in the book that the roasting juices at the end has little curds of milk that splits from the lemon. Solidified blobs of milk proteins doesn’t appeal so I mix 1/2 tsp of cornflour with some of the cooking liquid, slowly pour this into the pan and stir to help thicken the sauce slightly and prevent it splitting, before placing the chicken into its milky lemony bay bath, put on the lid and transfer to the oven.

But, yet again I haven’t followed the recipe, when I was looking for the ingredients for this online when I was at work and didn’t have the book on me I came across a post by www.thekitchn.com where they had, by accident originally, covered the chicken for the first half of the cooking time before removing the lid halfway. Doing this helps baste the bird in steam as it cooks whilst its covered with a lid, eliminating the need to baste the bird like Jamie suggests yourself, which is probably, without a doubt my most hated task in the kitchen. I feel the whole point of cooking in the oven is so you can walk away from it, not sit perched by the door armed with a basting brush.

Once the chicken has had its half time covered then other half of the cooking time uncovered, the chicken should be cooked, the skin golden and the sauce a little reduced. Because I only used a small amount of cornflour it is still a somewhat runnier sauce. Squeeze the garlic out of their skins and mush into the liquid, pull apart the chicken and serve with something to soak up the sauce.