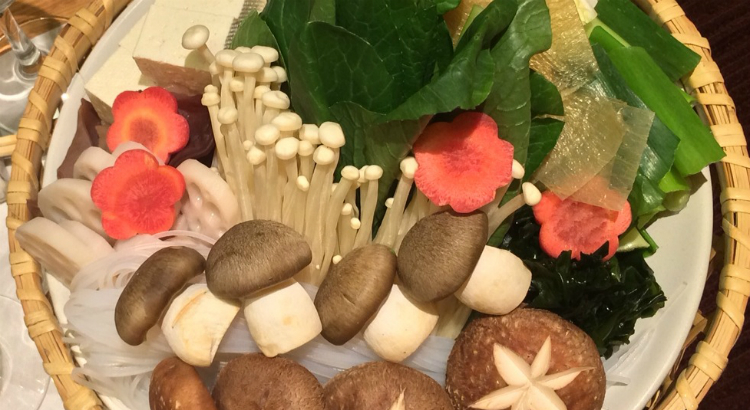 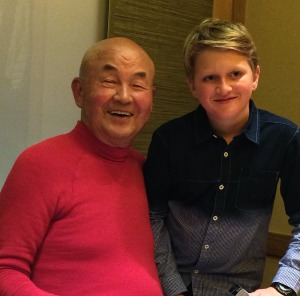 On a recent trip to Tokyo, we had the opportunity to be taken out for dinner with Mino Tsuchida or in Australia we commonly refer to him as “Mr Global.” We were looking forward to Mino’s choice of restaurant as it had been a bit hit and miss with our culinary experiences in Tokyo, partly due to the fact we had children in tow that narrowed our choices. We jumped at the opportunity to be taken to a restaurant of his choice.

The taxi convoy to a restaurant called Kisoji included our fellow travelling companions, 4 children and Mino. Kisoji is a series of restaurants in Japan that specialise in shabu shabu. The restaurant interior, as expected, was relatively traditional and we were welcomed graciously by staff dressed in kimonos. Potential communication difficulties between the guests and Mino were overcome after being once again reminded of Mino’s jovial nature, permanent stretchy smile and his passion for sake (and his determination to make his companions enjoy this passion too). 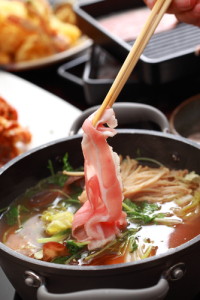 The Japanese seem to treat the presentation of their food as an art form and we were not disappointed. The sashimi delivered to the table reminded me of an enchanted garden. This was followed by our main part of the meal of shabu shabu and sakitori.

Shabu shabu involves a ‘pot’ of boiling water into which meat and a variety of vegetables are gradually added. Sakitori is similar but involves using a pot of boiling Japanese stock to which the meat, vegetables and noodles are added. Once cooked, the pieces are removed from the pot and either consumed right away, or with shabu shabu dipped in a selected condiment before eating.

The thinly sliced marbled raw meat was impressive in how it perfectly fanned across the platter. The array of vegetables was also presented like an enchanted forest. These arrangements were decimated as we cooked, sloshed, dipped, ate and enjoyed our shabu shabu and sakitori. Thanks must go to Mino “Mr. Global” for being such a delightful and entertaining host.

Check out our recipe for shabu shabu here!

Justine is marketing director and co-owner of Kitchen Warehouse. She loves entertaining and will not refuse a good glass of wine.