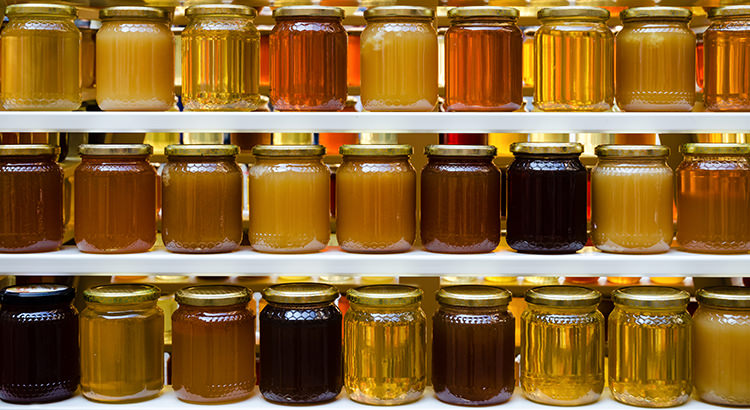 We all know honey for its flavour enhancing sweetness. It makes a perfect alternative for sugar but is more healthy. Add it to a dish or a beverage and it will give you a yummy distinctive taste plus additional health benefits. Some even say, when you eat it raw, the more nutrients you get (which actually applies to almost every vegetable and fruit). But what do we not know about honey, aside from it comes from bees? Is it true that it can heal allergies and wounds? When did people discover that it’s safe to eat?

Learn more about honey and the busy bees. Join our What’s the Buzz: Backyard Beekeeping workshop.

Here’s our list of the top five interesting facts you should know about honey.

1. First edible honey was found in the pyramids

The world’s oldest sample of honey was found in Egypt’s famous pyramids not long ago. By accident, some of the modern archaeologists who were digging holes and studying the ancient tombs found pots of honey. It was believed that the pots filled with pure honey have been stuck under the desert for over 3,000 years—and still perfectly edible. According to research, the secret to the everlasting shelf life of honey is found in its active compounds of hydrogen peroxide, acidity and lack of water, fighting off pests and bacteria that come near it.

2. Honey is an effective salve for infections

Since the ancient times, honey has been used to nourish the body and protect it from inflammation, bacteria and infection. Due to its high glucose, antioxidant, and hydrogen peroxide levels, honey possess antibacterial properties that prevent infections, help heal wounds faster and ease skin cell renewal. Back in the day, honey was widely used to treat wounds, even deep ones. It may have lost favour now in the medical field but for some households, it’s a welcomed idea. Some even claim that the US army use it in the battlefield when they are out of disinfectant.

3. Honey is an excellent immunisation for hay fever

Many believe that with regular consumption of local honey, they can reduce hay fever symptoms that include a runny nose, puffy eyes and difficulty in breathing. While experts are still debating on its effectivity, there are some who suggest that it can be effective when taken for at least five months before the pollen season. Since honey is rich in pollen and nectar, it can help the body tolerate allergens and pollen counts during summer.

Drinking warm lemon mixed with honey can soothe a sore throat and ease coughing. In one study, researchers found that a honey helps treat upper respiratory infections with children as young as two and teenagers as old as 18 years. It suggests that honey can be an effective homemade remedy for cough and sleep difficulty of children. So, next time your child develops cough or colds, you might want to try giving him some honey.

5. Jarrah honey does not crystallise

Jarrah honey is nectar gathered by bees from flowers that blossom out of the Jarrah tree (eucalyptus marginata). It has a thick consistency and dark colour that bring out its smooth caramel taste, making it popular amongst food critics and top chefs. It is known as one of the healthiest honeys in the world but is unique and can only be found in Western Australia. Researcher have found that unlike any other honey, Jarrah contains very low glucose level, allowing it to have an infinite shelf life. This means, Jarrah will never crystallise nor spoil even after thousands of years.

Honey is the only food source from insects that humans eat. Well, it’s hard not to love honey when it tastes so sweet and smooth in the palate. If you can, try keeping beehives and harvesting honey from your own backyard or farm. Helping the busy bees pollinate our forests and grow our farms can surely make a great impact, hey!