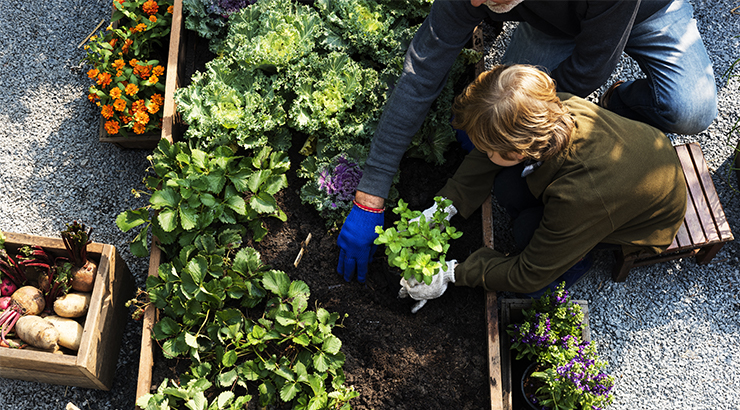 Having a green thumb is not only a matter of inherent talent. There is a simple science behind successfully growing plants anyone can learn.

Paul Beveridge, for instance, stumbled into growing plants serendipitously. An accountant by trade, Paul quit his fast-paced career after more than a decade and moved into a 2.5-acre property up in the Perth hills with his family. What do you do with that much space? Start growing plants, of course.

“My aim was to actually teach my kids where their food came from, not to wait until they were 10 years old,” said Paul. “I had toddlers and babies who were crawling around the veggie garden while I was making compost and planting potatoes. I digged the trenches and they popped the potatoes in the holes. It’s amazing when the kids, down on all fours, start digging and find potatoes in the ground.”

Paul, and his kids to an extent, studied and learned about growing plants as they went, from his own research, talking to other growers, and doing as much planting as he could. As he started to learn more and more, he realised how good quality seeds were hard to find around town so he started to grow his own. And that’s how the seeds for Perth Hills Veggie Co were planted.

On his very first pop-up shop—which really was just a trestle table outside the local food shop of someone he knew—Paul sold 1000 tomato plants. “All of a sudden we went from me thinking I was growing a few tomato plants I was gonna sell at the local market to…within 12 months, supplying Waldecks and [leasing] a nursery because I couldn’t supply it from my backyard anymore.”

That was three years ago in 2015. Today, Paul’s small business continues to be one of Perth’s leading producers of plants, seedlings, and seeds, including culinary and medicinal herbs, super hot chillies, perennial flowers, and an extensive range of heirloom vegetables.

“A good idea—don’t take me wrong, it takes a lot of work—but a good idea doesn’t take a lot of convincing for people,” Paul said, reflecting on the rapid growth of his small business. It is also a lesson in hope, that there is hope yet for every seemingly clueless gardener, like myself. Growing plants is not easy, but neither it is impossible to learn, as Paul has shown.

Paul is quite passionate about teaching people how they can get into growing plants at home, whether they have a garden or a mere planter box. “It’s valuable to people once they’ve tasted something they’ve grown and they realise it tastes so much better, and it’s not just in their head.”

Paul shares four things every urban gardener needs to get right to start growing any kind of plant home.

If you are keen to learn more, catch Paul at our Plant, Grow, Eat: An Urban Gardening Starter workshop.

“The nutrients that are in the food you grow come from the soil. You only get out what you put in. Buy the best soil you can, preferably organic, but buy something that has the right nutrients,” explained Paul. He said that different varieties require different nutrients and growers need to find out what those are. Leafy greens, for one, will thrive with nitrogen and potassium and a bit of phosphorus. Lettuce and carrots will grow in soil that don’t have much nutrients but will grow more abundantly in nutrient-rich soil.

“Horses for courses. It’s about feeding your plants the right nutrients that they need to grow.”

“When you grow plants in season, they will grow better,” said Paul. It sounds simple and sensible enough. “Plants naturally have a temperature they will germinate in. Plants have evolved to know that it needs to germinate at the right time of the year otherwise it won’t actually be able to grow flower, set fruit, and reproduce.”

That is not to say that you can’t grow whatever you want whenever you want to, short of a greenhouse; it just would be more technical and challenging. “If you’re going to try to grow something out of season, you have to correct the conditions. That’s why it’s easier to grow within the seasons.”

“It’s about the right amount of light for a particular plant,” noted Paul, adding that a certain spot in your house or backyard could receive different amounts or intensity of light throughout a day. “Full sun” or “partial shade” also vary based on the intensity of sunlight you get in your location.

“Tomato, capsicum, and chillies like warmth and high temperature to photosynthesise” he cited as an example.

Paul also emphasised that day length affects plant growth. “You can plant cucumbers in September but they will continue to produce male flowers until you get to the longest day of the year and then they’ll start to produce female flowers. The rationale behind that is they know they’re getting into the summer months, the end of their life cycle.”

“It’s not too wet, it’s not too dry,” said Paul. He cited Mediterranean plants like rosemary, oregano, thyme, and lavender as being able to tolerate drier soil but prefer a well-drained soil.

Over-watering plants is almost as bad as not watering them enough, added Paul, as it also has the added effect of washing out nutrients from the plants and causing too much to accumulate in soil and river, which causes algae.

Plants grow differently and require different conditions to thrive. Paul helps make it easy for his customers by adding planting information on the seed packets showing important guidelines such as when to sow and harvest, how deep to sow, soil temperature required for germination, and how much space to put between plants. When it comes to planting information, Paul believes that having more than enough information at your disposal is better than not having enough.