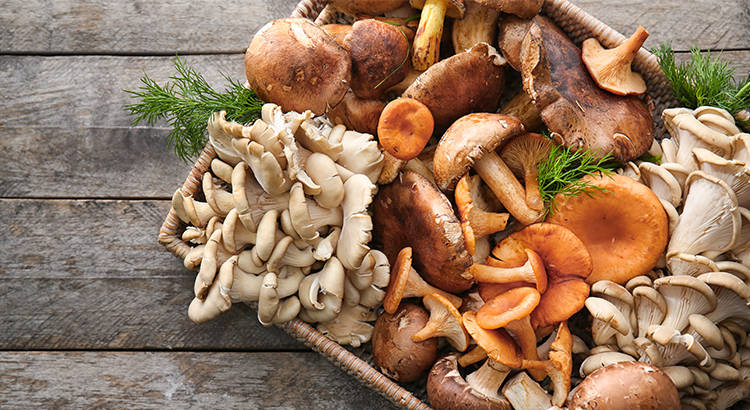 With the growing interest in the culinary arena coupled with the increasing familiarity with exotic ingredients, it’s no wonder people are more than keen to try out something new in the kitchen. With different types of mushrooms now available in the market, they’re the perfect produce to level up your favourite recipes. The only question is, which one should you get?

Worry no more because we are giving you a quick primer to help you match your soup, sauce, or pasta with the right mushroom type. But before putting on your apron, it’s best to know more about this star ingredient and what it can do for your dishes.

Mushrooms belong to the fungi family. Their spongy bodies are rich in vitamins, minerals, fibre, and antioxidants. Their earthy, almost meat-like flavour is brought about by their glutamate content, making them tasty despite having no salt and fat. They’re gluten-free, too! However, not all mushrooms are safe to eat.

The deathcap (Amanita phalloides) is one of the most common poisonous mushrooms in Australia. In an article by the Food Safety Information Council (2017), it was noted that 9 out of 10 deaths due to mushroom poisoning in the country are caused by deathcap consumption.

In Victoria, mushroom poisoning is mainly due to the ingestion of Agaricus xanthodermus or yellow-staining mushrooms (Royal Botanic Gardens Board Victoria, 2015). And while ingesting this type of mushroom is not fatal, nausea, cramps, vomiting, and diarrhoea typically follow right after eating it. Other wild mushrooms that have caused reports of poisoning include the ghost fungus (Omphalotus nidiformis), shaggy parasol (Chlorophyllum brunneum), and the common earthball (Scleroderma citrinum).

One of the important things to be aware of about these poisonous fungi is that they look similar to edible mushrooms. The ghost fungus for example is often mistaken for the tasty oyster mushroom. Moreover, the toxin within these mushrooms cannot be removed by trimming, soaking, cooking, or drying. Thus, it is recommended to take great care when eating wild fungi. Better yet, purchase your mushrooms from local farmers, groceries, or any reputable source.

Mushrooms are pretty versatile and can be added to almost any recipe. However, they do have distinct texture and flavours that go well with certain dishes. Read on this list we’ve made and see if you can recreate our suggested dishes with your favourite mushroom variety. 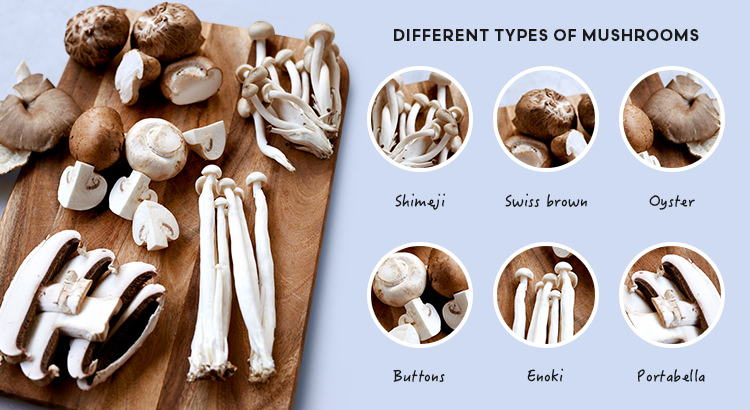 This list highlights the common types of mushrooms used in most Australian households. These mushrooms are also typically available fresh in the market.

Button mushrooms, or more commonly known as champignons, are generally small in size. They are firm in texture with caps tightly closed around the stem. Their flavour is mild but grows more intense when cooked.

Button mushrooms can be eaten raw or cooked, and served whole or sliced. They taste best when barbecued or in salads, risottos, pizzas, pastas, and stir-fries.

Cups are basically older button mushrooms where the cap has opened and spread away from the stem. Similar to the young buttons, cups are also firm in texture. However, they also get to develop a darker colour and more intense flavour with age.

To make the most of their great flavour, slice, dice, or quarter your cups for cooking. They are highly versatile and suit any method of cooking, but they are at their most flavourful in pastas, pan-fries, sauces, casseroles, and soups.

Flats, or field mushrooms, are the full-grown button mushrooms with caps now fully opened and dark gills exposed. They have a denser, sponge-like texture and a robust flavour.

Being the perfect meat substitute, they taste best when roasted or barbecued. They also make a great flavour enhancer for sauces (as duxelles), tapenades, and soups. Try deep-frying them, too, and make tempura mushrooms.

Quick meal starter? Whip up bowls of this Creamy Mushroom Recipe that gets done in no time with the help of a blender.

Also known as cremini or Italian mushrooms, the Swiss brown is closely related to the button variety in terms of size and shape. However, they differ in colour, texture, and flavour as Swiss browns are darker and firmer with an earthier taste.

Swiss browns have less water in them so they keep their shape well even when cooked. They can be eaten raw, usually just marinated and served as an antipasto. They are also wonderful when sliced or diced for your pies, slow-cooked dishes, pilafs, sauces, and pasta

Turn your kids into instant mushroom lovers by serving them this Bacon and Mushroom Fettuccine Recipe.

The giant cremini or portabella is a full-grown Swiss brown, with its cap fully opened and dark, fragrant gills exposed. Like its younger variant, portabellas have a dark colour, dense texture, and rich flavour.

Similar to the flats variety, portabella are typically used as an alternative to meat, making them perfect for roasting and grilling. They all add a deep flavour to your sauces. Try replacing your burger patties with these meaty mushrooms or use them as a crust for your pizza.

Infuse unique flavours into your dishes using these mushrooms that originated from other countries.

Chestnut mushrooms, also called the cinnamon cap or brick top, are one of the oldest mushroom species, said to have been first cultivated by the Greeks. They are light brown with wide open caps on long cream-coloured stems. These mushrooms are firm with a nutty flavour.

Chestnut mushrooms are cooked whole or chopped with a small part of their stalks removed. Because of their low moisture content, they are great for pizzas, pastas, breads, dips, and pates. They taste delicious even when they are simply sauteed in butter, garlic, and thyme.

Keep yourself warm during the colder days with a bowl of Nori Omelette with Miso Mushroom Broth, a recipe by bestselling cookbook author Jody Vassallo.

Enoki mushrooms originated in Japan but are now also grown in Australia. They are known for long, thread-like stem with a tiny cap. Thus, they are sometime also called golden needles. They have a noticeable crispness and fruity flavour.

Enokis can be cooked or eaten raw but, as they are typically sold in clumps, you have to trim off the base before you can carefully separate and eat them. Toss them in salad, wrap them in rice paper rolls, or use them as sandwich filling. Because they are thin and cook quickly on a hot pan, enoki mushrooms can be added to your risottos, soups, or omelettes last.

Nothing beats dining together with a hot pot on the table during winter time. Try this Shabu-Shabu Recipe with lots of enoki mushrooms and have fun taking turns filling your bowls with warm broth.

The king oyster, native to the Mediterranean regions, perhaps got its name from being related to the oyster mushroom family and its distinct regal appearance—proud light brown cap and thick, tender stem. King browns also have a rich flavour and are known for having a long shelf life.

These large mushrooms are typically sliced lengthwise or diced. They are great cooking mushrooms as they retain their chewy and firm texture. King browns taste best when pan-fried or when combined with meats, seafood, pasta, and rice.

Enjoy the full flavours of siced king browns by tossing them in butter, garlic, and parsley in this Cast Iron Sauteed Mushroom Recipe.

Oyster mushrooms have grown popular because they are one of the few species that are easy to grow at home. They have a fluted, shell-like caps and bodies that vary in colour. White, yellow, pink, grey-brown, and purple-brown oyster mushrooms are commonly found in Australia. Their texture is soft and velvety while their flavour is delicate.

Oyster mushrooms can be enjoyed raw or cooked, whole, sliced, or diced. Cook them within a day or two after purchase as they have a shorter shelf life. Also, because of their softer bodies, they tend to absorb flavours and go limp quite rapidly, so it is best to cook them fast on high heat.

Oyster mushrooms make a perfect match with seafood, chicken, veal, and pork. They also taste great when added to soups and noodle dishes. Try deep-frying them, too, into chips or tempura mushrooms. Better yet, turn them into delicious topping following this Mean Mushroom Pizza Recipe!

Shimeji is a Japanese mushroom variety that naturally grows on fallen elm, oak, or beech trees. Thus, this variety is also known as beech mushrooms. These small mushrooms have white stems and brown-grey caps that grow lighter as the fungi mature. Their flavour is sweet and nutty.

Similar to enoki mushrooms, shimejis are sold in clumps. Trim off the base first to separate the stems for cooking. Shimeji mushrooms are best when stir-fried, sauteed, or added in sauces, soups, broths, and noodle dishes.

Add earthiness to your mildly flavoured grains and prepare this Pearl Barley Risotto with Wild Mushroom Recipe with a handful of shimejis.

Of course, not all mushrooms can be bought fresh. Good thing they are just delicious, and perhaps even more flavourful, when dried. But, unlike fresh mushrooms, dried fungi need to be soaked in warm water for around 20 minutes. After soaking, cook your rehydrated mushrooms right away. You can even use the soaking liquid as a cooking stock to add more mushroom flavour.

When fresh, chanterelles or girolles are yellow to orange in colour and shaped like an umbrella that has turned inside out. They are well-known wild mushrooms particularly in North America and Europe. These mushrooms also have a woodsy, apricot-like aroma and flavour.

Chanterelle is a favourite ingredient in French cuisine; thus, it is typically tossed in butter, oil, and cream. It also makes a great pair with dishes containing eggs, poultry, cheese, garlic, and onion.

White wine and chanterelle mushrooms make a perfect match just like in this Pearl Barley Risotto with Wild Mushroom Recipe.

Porcini belongs to the cepe mushroom family and is the most popular of its variety. These wild mushrooms originated in Europe, particularly in Italy, then dried and imported to Australia. Porcinis have a naturally rich and earthy flavour that intensifies when dried.

Using dried porcinis in cooking fills the kitchen with a smoky aroma. They add deeper flavours to pies, pizzas, soups, pasta sauces, gravies, and risottos. If you are mixing them into your stews or casseroles, add them at the start of the cooking process for a more intense mushroom flavour.

Keep a stash of the versatile Porcini Mushroom Pate in your fridge so you can easily level up your simple toast, risotto, or pasta. And did you know mushrooms can be used for desserts, too? Give this Porcini Caramel and Chestnut Cake Recipe by Hayley McKee a try!

Shiitake mushrooms or black Chinese mushrooms are commonly used in Asian cooking. When fresh, their color ranges from golden to dark brown. They have a firm, fleshy texture and a broad, dome-shaped cap with cream-coloured gills.

The shiitake mushroom stem is quite tough so it is usually trimmed off, chopped, then used to in making stocks. Dried caps should be soaked in warm water for 30 minutes before cooking them into your soups, noodles, or stir-fries.

Put your wok to good use and make bowls of quick yet tasty Korean Stir Fry Noodles for lunch or snack.

Whether fresh or dried, there is a perfect type of mushroom that will go well with any dish. And if your are trying to limit your salt or meat intake, mushrooms can be your flavourful, more nutritious alternative.