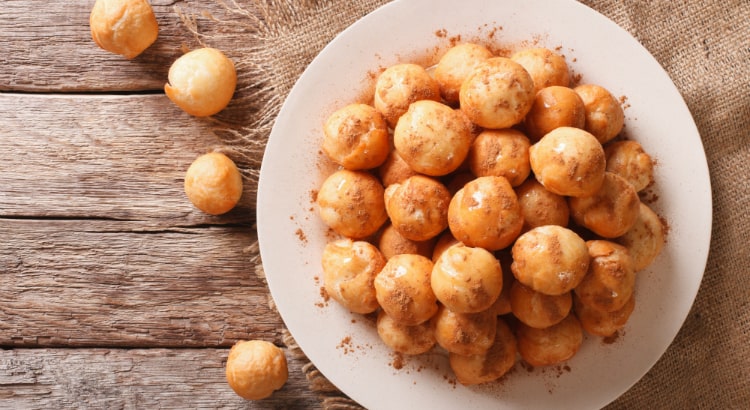 Loukoumades are doughnuts steeped in Greek tradition. This traditional Greek delicacy is lovingly made at home and served for special occasions. What makes it uniquely Greek is the addition of mastiha, a resin from the mastic tree traditionally grown in the Greek island of Chios.

Loukoumades are round puffs of dough deep fried to golden perfection then smothered in honey, nuts, and cinnamon. Vegan to boot, loukoumades are certainly not your average doughnuts.

This loukoumades recipe by Irene Starr, one of our store managers, appears in a beautiful Greek cookbook called From Our Greek Kitchen To Yours edited by Helen Anastasas.

The cookbook was put together by the Castellorizian Association of Western Australia following a huge outpouring of interest and passion from a community of local women keen to share beloved family recipes passed down from one generation to the next.

Irene was one of these women. She grew up seeing her mother Anna Zagorianas and cousin Poppy Tyllianakis make loukoumades at home but didn’t get into making them until later.

“[They] took much pride in only serving perfectly round ones, which they called margaritaria (pearls). Anything with tails or horns didn’t make it on the plate. At the time, I took no notice or had much interest in how they are made, but enjoyed eating them,” Irene was quoted as saying in the book.

Irene got involved in the family tradition when her sister Effie Magoulias and cousin Poppy tasked her to help make them for their local church. With her family and other wonderful volunteers, Irene continues to make loukoumades for a monthly fundraiser for the parish of St Nektarios.

“I hope this recipe continues to be passed on to the next generation, so that they will have a sense of belonging and community.”

Irene Starr quoted in From Our Greek Kitchen To Yours

*Mastiha can be bought from continental specialty stores

Tip: To make the sugar syrup, add 2 cups of water, 2 cups of sugar, lemon juice, cinnamon stick, and cloves into a saucepan. Stir them all together until the sugar has dissolved. Allow to boil gently for 10 to 15 minutes.

From Our Greek Kitchen To Yours is available for $40 from the Castellorizian Association of WA.

New In ✨ Inspired by the fashion trends of the l