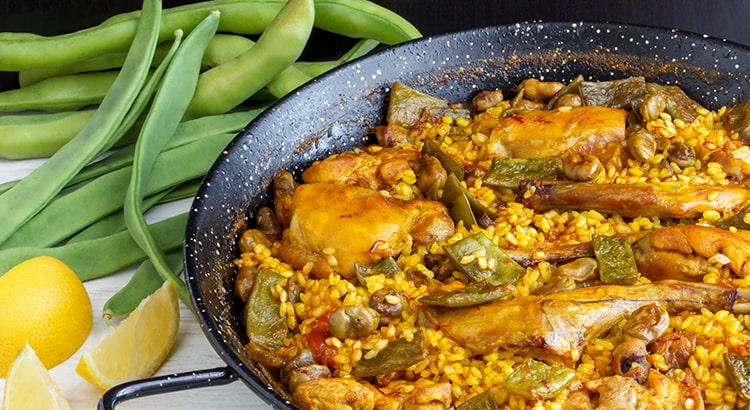 The secret to a delicious paella is a rich tomato base, flavourful stock and essential saffron. And with the most traditional Valencian additions to top it—rabbit, chicken, and beans—what more could you ask for? Learn how to cook it like Lady Paella with this easy recipe.

Paella may be the most famous Spanish dish in the world but its origins are surprisingly humble. Yes, it’s not a singular dish created by some inspired cook. It started as the farmer’s simple lunch originally made with rice and whatever was in the fields (such as tomatoes, onions, snail and a few beans). For special occasions, rabbit, duck and chicken were added as well as saffron for extra colour and flavour. As soon as it finishes cooking, people would happily eat it straight from the pan.

Valencia in eastern Spain is the undisputed birthplace of paella. Thanks to the Moors docking on the city’s Mediterranean port, rice was introduced locally and Valencia has since been one of the most quintessential rice-producing areas in Spain. Thus, the birth too of the countless variations of the recipe. Being on the coast, it’s no surprise that most are seafood-inspired. To this day though, the true paella Valenciana has no seafood but a mixture of chicken, rabbit and snails with green and white beans.

If you feel confident to make paella at home, then this is the recipe you must try. This is from Jessica Alvarez, Melbourne’s Lady Paella herself, gold medal winner for Asia Pacific at the 56th International Paella Valenciana Competition. Jessica, who has competed with the best in Spain, teaches our paella workshops in Melbourne.

The pan used to make paella, also called paella, from which the dish got its name, is a flat, shallow, wide, and round pan with slightly sloping sides. It is an important pan that lends authenticity to paella in taste, texture, and serving. The shape ensures that the rice cooks evenly in one layer. Experts say the best paella pan should be made of carbon steel so it heats fast but won’t retain too much heat, allowing for rice to cook and get a nice crust without burning. Though you may substitute a stainless steel or aluminum skillet, cast-iron and non-stick pans are highly discouraged.

While there are many types of rice on the market, you can’t simply use any to make paella. Bomba rice which is unique in Spain is the best to use and it can be bought in specialty shops or by mail. However, it won’t be cheap. So if you want something more accessible and inexpensive, you may use short-grain rice like arborio—a rice used to make risotto—as they absorb about three times more liquid than regular rice, rendering more flavour to your paella.