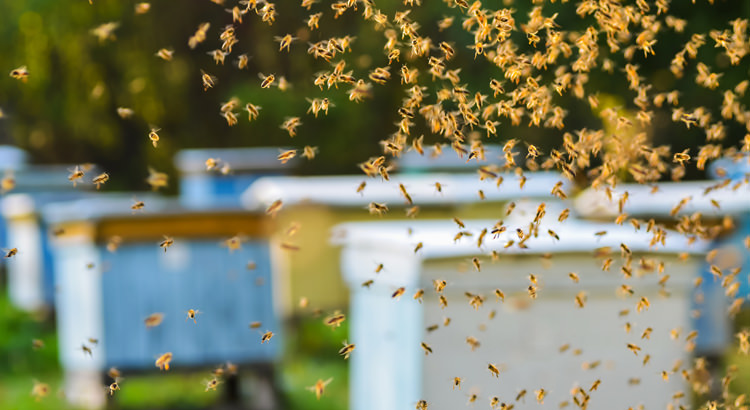 Whoever thought of the phrase “The birds and the bees” was certainly onto something.

Bees are amazing creatures, an epitome of having strength in numbers. As social insects, each bee has a clearly defined role to play for survival.

Hierarchy exists, yes, but only in service of the colony. Even the queen is only a queen because it is what the colony needs. Honey bees’ reproductive life is particularly interesting, it’s no surprise that the above phrase has been used as a metaphor to explain the mechanics of sexual reproduction to children.

Read on and pick up a life lesson or two from the fascinating social behaviours and sex life of bees.

If you see honey bees doing a figure-eight dance, don’t mistake it for some random movement. Honey bees communicate through odor cues and movement. A worker bee doing the “waggle dance”, as it is called, is letting other workers know where to forage for nectar.

Dancing is certainly not a bad way to rejoice in small victories.

Drones are male bees whose only role in the hive is mating. They don’t forage, clean the hive, or even guard the colony. And when they have fulfilled their purpose, or fail to do so, they face a grim fate.

Drones come from unfertilised eggs laid either by the queen or, in certain situations, worker bees. They can be distinguished from worker bees because their eyes are larger and they possess no sting.

Honey bees mate in flight which is where great vision comes in handy. Sexually mature drones converge in certain areas to seek a queen to mate with—and it is a competition among many. To mate, a drone must successfully mount a queen and penetrate a queen’s sting chamber. Mission accomplished, yes? It’s not much of a consolation though. The drone’s reproductive organs are torn off from its body in the process of mating and the drone drops dead, literally.

Remember to make the most of every day.

3. It is a worthy sacrifice.

Don’t despair for the drones though. Reproduction might be their sole purpose for existence but it is critical to their colony’s continued survival. And they are fine with that (probably because the alternative is even grimmer).

Female bees, which are either queens or workers, have 32 chromosomes, half of which come from their mother and half from their father. Male drones, having come from unfertilised eggs, only have 16. That means drones not only ensure reproduction per se, but genetic diversity.

Having such diversity in genetic makeup ensures species are generally more resilient to disease, more adaptable to changing environments, and more capable of continuing to reproduce. And as the queen bee mates with about a dozen drones from different hives during her mating flight, the greater the genetic variety she acquires.

The alternative for drones is not any more desirable either. Drones who are not able to mate are allowed to return to the hive. However, when food stores come under pressure in the cold months, drones, unable to serve any other purpose, are kicked out of the hive. Having no stinger and being unable to forage for food, drones will still eventually die, quite miserably at that.

Take pride in your work. Wouldn’t hurt to upskill either.

With drones having a single purpose to fulfil, evolution’s allowed them to go out with a, well, big bang.

Remember the drone mates with a queen in mid-flight? When they get into a drone congregation area, they may fly up to 38 meters off the ground at a speed of about 24kph. A drone has to beat out other drones and attempt to mount a queen while flying at top speed. When he succeeds in clambering onto a queen, the drone everts his endophallus or penis and ejaculates into a queen’s sting chamber with such force, a human nearby may hear an audible “pop”. Yes, it makes a sound.

But even that serves a purpose. The drone must blast his semen with immense force as it needs to flow from the sting chamber and reach the oviduct. And it is this same force that kills him.

Whatever you do, do it well, hey.

Drone bees may be a dime and a dozen, but queens are precious. Only one queen can rule a hive at a time, after all.

The queen bee rules with neither crown nor army though. Rather, she controls her colony with her smell. The queen emits pheromones that dissuade female workers from mating while encouraging drones to do so. Her odor cues also show how well or poorly she is faring, health-wise.

The queen grows up to 2cm and is the biggest bee in any hive. They live longest too, up to four years, whereas worker bees only live for weeks.

How one becomes a queen is entirely up to worker bees. Any fertilised egg has the potential to be a queen. Potential queens are fed by worker bees with protein-rich secretion called royal jelly. (A research suggests that it’s not the exclusive diet of royal jelly that makes queens, rather not being fed pollen and honey like other bees.)

Worker bees begin raising potential new queens when they sense that the current queen is starting to falter. They may even raise an emergency queen should the current one meet an untimely death.

So who becomes the one virgin queen from among the potential queens? Well, whoever emerges first and is quick enough to kill her rivals. Truth.

Be your own queen; you have it in you. (Just don’t go shutting down rivals.)

6. Better quit while you’re ahead.

Reigning over a colony must be sweet right? Yes and no, in the case of the queen honey bee.

In any hive, the queen may be the most pampered member. Worker bees attend to her every need, from feeding her to cleaning up her waste. But I suppose you would need help when you are laying up to 1500 eggs every single day for as long as four years!

But if you reckon the queen would be entitled to a comfortable retirement, you got it wrong. Once worker bees sense, through the queen’s odor cues, that her health is failing or that she is at the end of her reproductive life, they start grooming new queens.

What of the old queen then? She is either killed by the new one or by the workers. Even an old queen in a newly established swarm from an old colony will eventually meet the same fate. In bee-dom, there simply is no room for unproductive members.

Don’t wait to get sacked. Leave on your own terms.

7. Don’t work yourself to death.

With the queen and drones obsessed with their missions, worker bees are left to pick up the slack. And oh boy, do they. In their short life, worker bees progressively move from one role to another.

They start out doing housekeeping, like cleaning up, then move on to nursing larvae and building the honeycomb. They use their wings to fan the hive, create heat, and carry water. As guard bees, they protect the hive from unwanted company. As foragers, they scout and collect food for the colony. It’s no wonder worker bees only live to about six weeks (winter bees live longer)—they work non-stop!