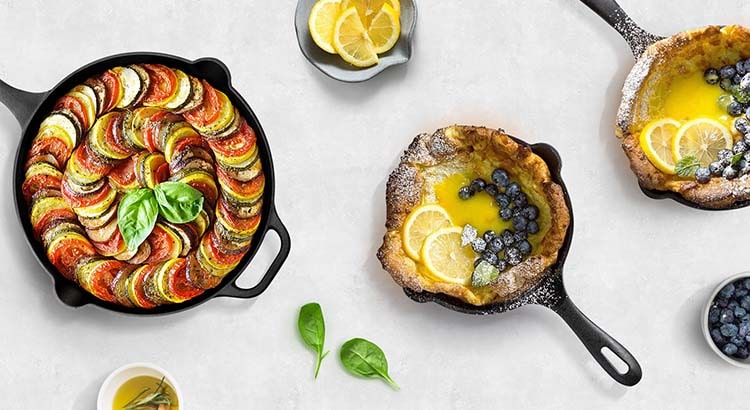 Admit it, you’re looking for a secret weapon in the kitchen. The answer is cast iron cookware and frankly, we think it’s pretty hard to look past Victoria.

So you can boil an egg, maybe even cook sausages and perhaps you’ve learnt how to make spaghetti Bolognese in a non-stick pan.

You’ve got a few classic crowd-pleasers in your cooking repertoire but now you really want to hit some home runs, you know, impress the people you love.

So we’re going to let you in on a secret, if you want to step it up in the kitchen, you need to add cast iron to your arsenal. Nothing turns out better steak, pan pizza, lasagne, fish and tortillas than cast iron cookware.

What is Cast Iron Cookware?

Heavy-duty cast iron cookware has been used by cooks for centuries. Originally—like way back when—it was designed to use over an open fire. It was relatively easy to produce and virtually indestructible and obviously, totally at home in a raging fire. Its popularity was shelved when non-stick pans became popular mid last century.

But early this century people realised cast iron really is the business and it started to make its mark again. Now, you’ll find cast iron in professional kitchens and the homes of cooks who know what they’re doing.

What’s So Good About It?

Cast iron has several unique properties that make it covetable. But, if you talk to chefs about what truly defines delicious in terms of cooking technique (not flavour or ingredients), they will tell you the secret lies in the colour.

Put simply, colour equals flavour. But browning something to perfection is not as simple as it sounds. Because the trick is, (mostly) you don’t want the food to only cook on the outside.  You need it to cook right the way through and brown on the outside at the same time.

Cast iron can be heated to high temperatures and it radiates heat, and that means food that contacts it not only cooks on the surface, it also cooks right through. You can have a very hot pan without worrying that you are only going to burn the outside of the dish before the inside is cooked through.

Other reasons cast iron is well-loved is because it’s extraordinarily durable when properly cared for. That means it will last a lifetime and beyond. There are no nasties to leach into food and no chance of a coating chipping off.

5 Things to Know About Cast Iron

How to Season Cast Iron?

Our favourite cast iron, Victoria , comes pre-seasoned!  Which means it is ready to go. But, over time it will need to be re-seasoned.

There are plenty of youtube tutorials you can watch to learn more.

Why We Love Victoria

When you want to get serious about cast iron this is the go-to brand. Made in Colombia, Victoria is a three-generation, family-based business established in 1939 out of a love of the art of forgery. Recognised for their progressive designs, quality and sustainability, Victoria is the gold standard in cast iron cookware because they’re as committed to tradition as they are to innovation.

We love their cleverly considered long arched handles which keep hands away from heat and the addition of pouring spouts and accessories that make working with the product easier.

It’s amazing to think in this day and age you can still buy a product that is made by a family who literally pours their own blood, sweat and tears into creating this incredible kitchenware that can be handed down to future generations.

The range is huge, with a product perfectly designed for every situation, and best of all Victoria comes pre-seasoned. Which means it’s ready to go.

We promise if you are looking to improve your cooking game, the skillet and saucepans will become your new favourite kitchen tool and it won’t be long before you are coveting the amazing tortilla press. 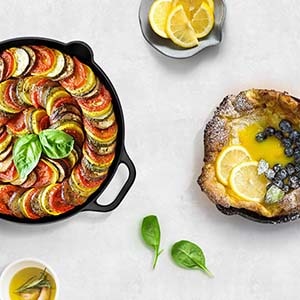 Article Name
Why We Love Victoria Cast Iron
Description
Admit it, you’re looking for a secret weapon in the kitchen. The answer is cast iron cookware and frankly, we think it’s pretty hard to look past Victoria.
Author
Kristen Watts
Kitchen Warehouse

2 Replies to “Why We Love Victoria Cast Iron”

Home is where the hummus is 💛 It's internationa

Tender and succulent, this lamb shoulder recipe in

Say hello to your new favourite oil and vinegar di