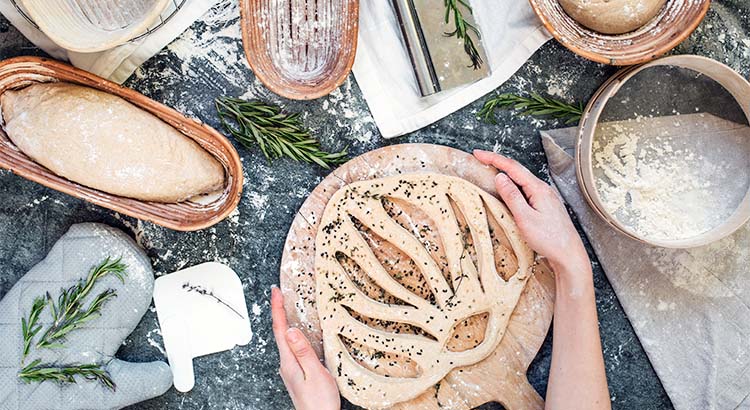 In the popularity stakes, anything small-batch, artisanal and handmade is enjoying a resurgence. And with good reason because whether it’s bread, biscuits, pickles, preserves, sauces or sausages, nothing compares to food that is made the old-fashioned way.

We know what you’re thinking. It’s a tragedy you didn’t listen when your grandmother tried to show you how to bake bread or pickled onions.  Why were you so hell-bent on avoiding family sauce-making weekends?

The good news is, it doesn’t matter. It’s never too late to learn and master the art of DIY delicacies such as sourdough, preserves, cheeses and sausages. It’s time to start a family tradition of your own and what better way to start than with your own bread.

Want to become the hero of the household? Start by baking your own sourdough.

Its chewy texture, crisp crust and distinct flavour make it a crowd favourite. Enjoy it fresh in sandwiches, toasted and smothered with butter or topped with smashed avocado. Nothing is quite like a house filled with the happy aroma of freshly baked bread.

Unlike other bread, sourdough doesn’t rely on commercial yeast as a raising agent. Instead, the magic happens thanks to something called a starter.

Step 1: Make your own starter

Baking your own bread at home can seem daunting, but when you break it down, there are very few ingredients and the process is quite straightforward, especially if you have some simple equipment. But it does take time and patience.

The starter is basically just a culture of flour and water that in turn yields wild yeast and good bacteria. Those things not only cause the bread to rise, but they also create a sour flavour.

It takes about five days to make a proper starter. Begin by mixing flour and water in a batter and let it rest overnight at room temperature, this encourages wild yeast growth.

After the first day, the mixture needs to be fed with more flour and water.

The process is repeated until the mixture becomes very bubbly and smells sour.

The starter can be fed and used continuously. Once you’ve created it, you never need to repeat the process as long as you look after it and feed it regularly.

When the starter is ready, its finally time to move on to the next step and what you are about to make is called leaven.

Mix a tablespoon of the starter with more bread and water and let the mixture sit for 30 minutes to four hours. There’s a lot going on during this step, even though it probably doesn’t seem like it on face value. Next, it’s time to mix in the salt.

There are many schools of thought on the best way to mix sourdough. Some people prefer kneading, others folding. It’s a good idea to google this subject to learn more. The short story is, folding is less labour intensive and lots of people think it delivers the best results.

Once the mixing is done, it is time to let the dough rest, yet again.

Step 4: The Proof is in the Pudding

The next part of the process is fun and exciting because here you will shape your final loaf.

The dough goes into a nifty piece of equipment called a proofing basket. The basket is specially designed to encourage the dough to rise in the shape of a loaf.

Finally, it is time to bake the dough and any home baker worth their salt will tell you a Dutch oven is the best place to do that. Dutch ovens hold the heat and keep it at an even temperature, seal well to allow the bread to steam which in turn creates the perfect crust and interior and they’re a great shape.

To make the starter

To make the dough 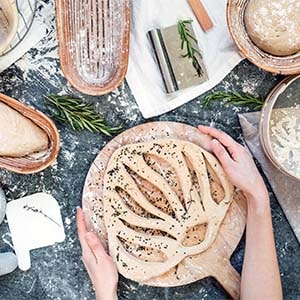 2 Replies to “Master the Art of Baking Sourdough: We Promise You’ll Never Look Back”